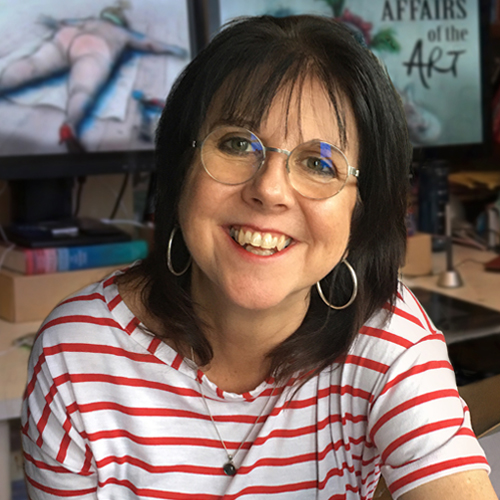 Joanna discovered animation at Middlesex University London while studying for a BA degree in Graphic Design. Her graduation film Girls Night Out, a brilliantly simple and humorous riposte to machismo and a celebration of uninhibited female sexuality, introduced audiences to the character of Beryl and kick started Joanna’s animation career by winning 3 major awards at Annecy. The uniquely memorable character of Beryl became the focus for 3 more films Body Beautiful, Dreams and Desires - Family Ties and most recently Affairs of the Art. The politics of gender and oppression together with Joanna’s obsessive fascination with exploring the eccentricities of the human body, in particular the female form, became the central themes of her work. Her masterpiece is Britannia a savage indictment of British imperialism. Joanna’s films have won many international awards, including Baftas, Emmys and 3 Oscar nominations. Joanna is a committed educator and is an Honorary Fellow at the Royal College of Art, London and University of Wales and Honorary Doctor at Middlesex University, London and the University of Wolverhampton.

Joanna Quinn will be speaking at Animex AVFX.